Let me ask you a question. Is there any better day to start writing about Dublin than on St. Patrick`s day!? I would say NO, there is not!

You know when you are planning to do something, and it just slips away.  It’s always priorities that keep you away from chasing your dreams, there is always something more important to be taken care of, and sometimes you totally forget about what you really wanted.

I wanted to see a Trinity College library since I was a kid and saw pictures of it somewhere in National Geographic.

First of all, I love books. Second I LOVE places with tons of books, I love those dusted shelves (thank God I am not allergic), magic deep silence, where you keep whispering out of respect to the heavy volumes, even if no one is around and no one could hear you. You know the feeling, right?! Finally, Ireland and Dublin were on my bucket list for a looooong loooooong time.

I believe that Destiny took care of that, so one day I just found bargain tickets (flights operated by Ryanair for 2 GBP one way). Ryanair’s page kept crashing every time while I was searching flights to Madrid or Milan (you are desperate to see a little bit more sun in November in London), but I thought maybe it’s time to go to Dublin. So, few minutes later two tickets to Dublin. DONE.

I have to admit, I am not an early bird but waking up at 4 am in order to catch the morning flight is not a problem, when you know that in an hour you will be feeling lucky in Dublin.

Since we planned two days and one-night city break I wanted to see as much as possible. I made research, asked my Irish friend what should I see first (thank you John), and made a list.

Our first stop Ha`penny bridge, built in May 1816 originally called the Wellington Bridge, after the Dublin-born Duke of Wellington, but the official name is Liffey Bridge. I overheard funny story that in 2012 Dublin City Council had to remove hundreds of “love” padlocks (over 300 kg) from the bridge, as they caused damage to the bridge construction. Just a few years later picture would speak louder than words… 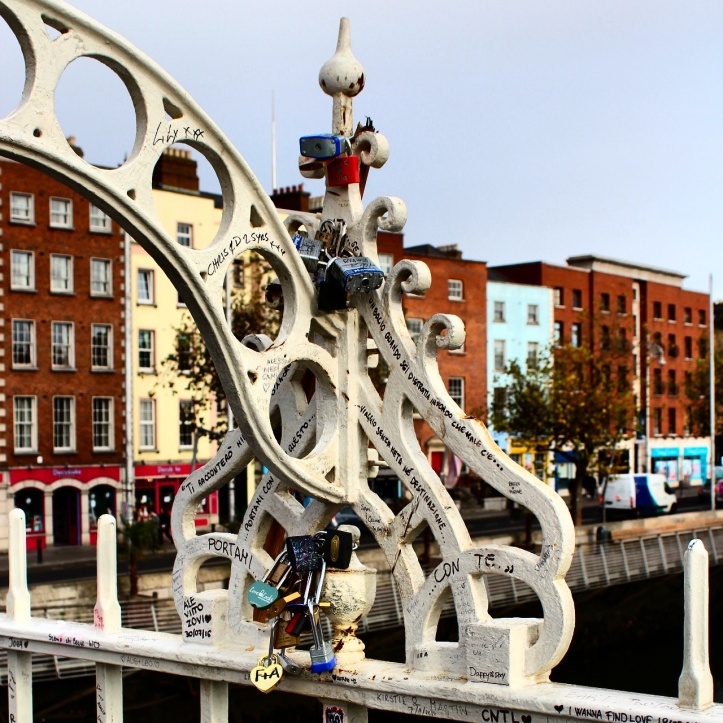 If you are looking for a great place to have your first meal in Dublin do not go too far from the Ha’penny bridge – Right in front of the bridge, you will see “The woollen mills, eating house”.  Here you can have a hearty Irish breakfast like we did it. In this wonderful place, you can have a quick coffee and sandwich, proper dinner, a glass of wine or a craft beer, do not forget to check their pastries and cakes (shh, they have their own bakery). They say that James Joys used to work there. 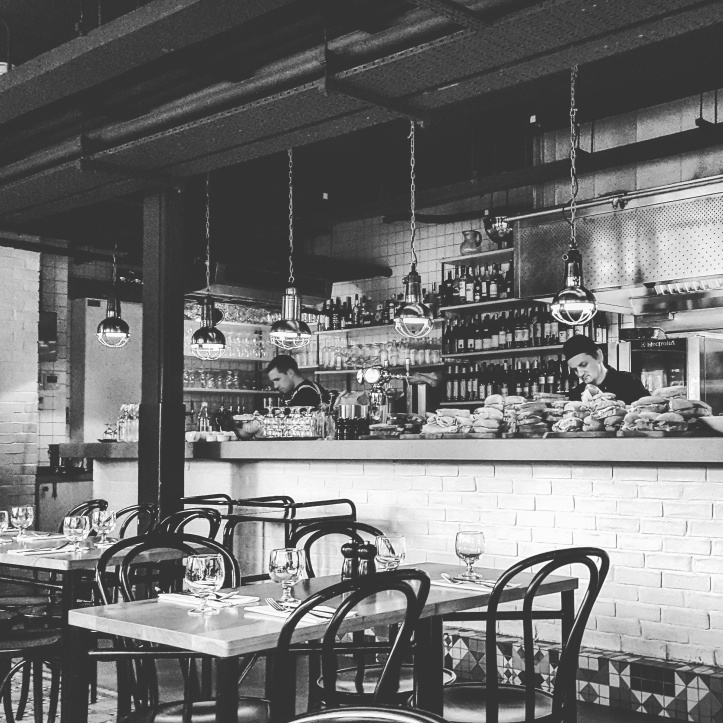 With a full stomach, life is much easier, so we were ready for new Dublin’s adventures.

Surrounded by lucky clovers and leprechauns you somehow feel lucky, you keep smiling and others are smiling back to you, you just forget about all troubles for a moment and enjoy the city. 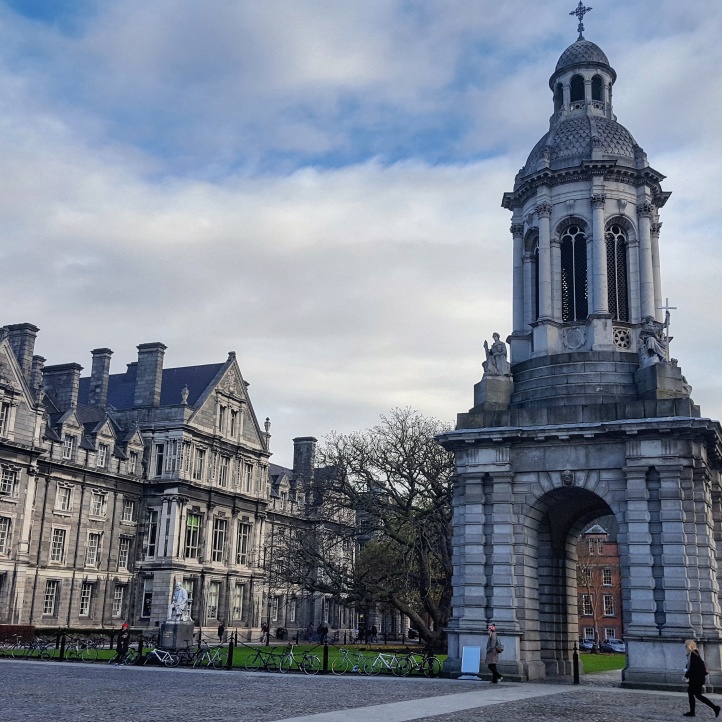 I will never forget a moment I entered the yard with a beautiful chapel, and I will never forget the thrill while standing in the Long room of Trinity College among all those heavy volumes. I forgot how to breathe, I was finally there. 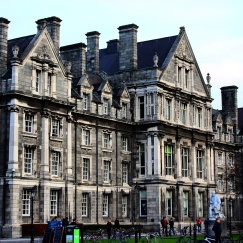 Trinity college library is the largest library in Ireland, it was established in 1592. It’s a permanent home to the famous Book of Kells, which was presented by Henry Jones in 1661. (Two of the four volumes are on public display), as well as to “official emblem of Ireland” Trinity college Harp (dated back to the 15th century). This symbol is frequently used by businesses and other corporations wishing to show their “Irish-ness”. Guinness bottle labels are perhaps the most popular, but do not forget about Ryanair as well.

Books, literature and Dublin definitely go together. You start thinking about Abraham “Bram” Stocker – best known today for his 1897 Gothic novel Dracula. Oscar Wilde – Irish playwright, novelist, essayist and poet, we all know him thanks to The Picture of Dorian Grey. Samuel Beckett – 20th century Irish novelist, playwright, poet, theatre director; in 1969 he was awarded a Nobel Prize for Literature. James Joyce – considered to be one of the most influential Irish writers of all time, but definitely known for Ulysses, published in 1922. In 2014 Trinity library purchased the most extensive collection of Samuel Beckett letters (347 in number) and finally Cecilia Ahern (with her beautiful magical novels, that are melting your heart almost from the first page). Bram Stocker, Oscar Wilde and Samuel Beckett have one more feature in common they graduated from Trinity College.

After completing the mission, we went to our hotel – Celtic Lodge Guesthouse. (www.celticlodge.ie/). Nice little hotel with great pub just next door. It is a great value for money, close to the city centre and all amenities. It is like you are in the middle of all events but still can have a proper rest.

One more advice while you are in Dublin, try national Irish cuisine it’s delicious and of course do not forget about Guinness. 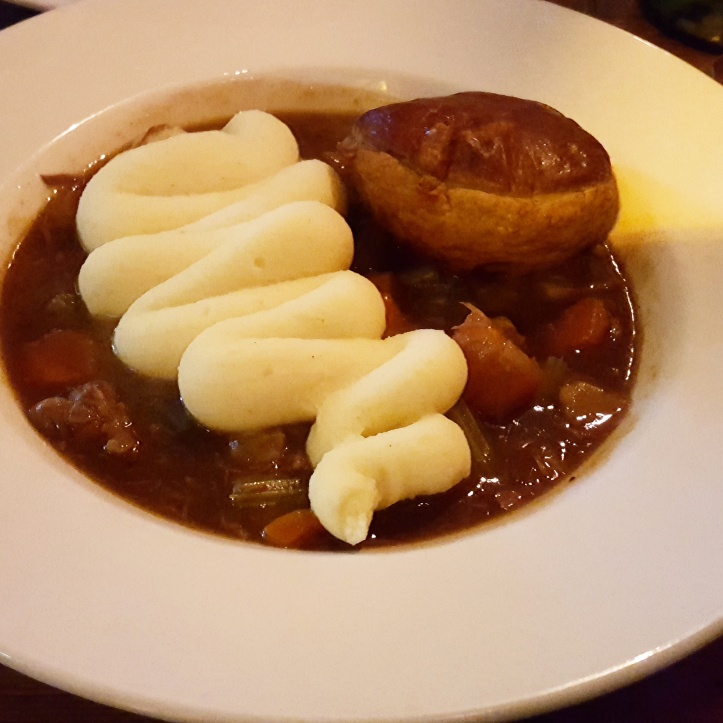 Almost every tourist instruction will draw your attention to the traditions and culture of drinking this wonderful beer.

So, short instruction for beginners:

Those who properly know how to pour a Guinness will grab a pint glass and fill two-thirds of the way full. They will then place it on the bar and walk away. Don’t panic, have patience, and, whatever you do, don’t touch it. Let the beer settle.

After a few minutes, the bartender will return and fill the pint the rest of the way. When the glass is perfectly filled, it will be brought over to you, but, it’s still not ready to be consumed. Remember you should only drink Guinness when you can see a clear division between the white foam, and the dark black beer. If the beer in your glass still looks murky and brown, the Guinness is not ready. Wait and then enjoy. I am not sure what is the reason but Guinness tastes the best in Ireland 😊, do not miss the opportunity to enjoy your beer in one of many traditional Irish pubs. THEY ARE AMAZING AND DESERVE A SPECIAL STORY.

With “Sláinte!” (To your health) we will end the first chapter of our story!