Guys hope you are doing fine, sorry for not writing, but I have been busy discovering new side of Bosnia and Herzegovina, enjoying its “spring edition”, refreshing memories and looking for more inspiration and I am ready to share with you some thoughts and tips for your future holidays …

I have never ever been in Bosnia and Herzegovina during the spring time, and it was a huge mistake, because it so beautiful there, while blossom trees hide away war scars, all those colours give hope for a better tomorrow and you are ready to enjoy and have fun!

My Sarajevo- Mostar spring city break was well planned, this time I was accompanied by my sister, and we wanted to get as much as we could.

We started our Bosnian adventure on a Sun(ny)day leaving our suitcases in little cute hotel Astra Garden in the heart of the Sarajevo, close to Baščaršija and famous Ćevabžinica Željo. This ćevabžinica Željo (named by famous football club in Sarajevo – Željezničar) became our first gastro stop.

So, what is– ćevap? This dish is considered a national food in Bosnia and Herzegovina, Serbia, Slovenia, Croatia, Montenegro and Macedonia, even Bulgaria and Romania. The word “ćevap” comes from the Persian word kebab. In Bosnia ćevapi, are made from two types of meat (beef and lamb), they are usually served of 5-10 pieces in flatbread (somun or lepinja) + chopped onions + kajmak (sour cream) and yogurt. For those who would like to discover divine taste of ćevapčići try also ćevapi from Mrkva or Ferhatović, both are also in Baščaršija.

After a nice treat, step by step we came to the building of a Sarajevo City Hall, Vijećnica.

The story about this building is really interesting and somehow “unhappy” from the beginning. It was designed in 1891 by the Czech architect Karel Pařík, who could not finish the whole project, due to the criticism of the minister Baron Benjamin Kallay. The project was continued by another famous architect and a chess master (it is said that he ranked 9th in the world in 1882) Alexander Wittek. He stayed in Bosnia for six years, he is famous not only for working on the Vjećnica project from (1892-1894), but he also worked on relocation of Sebilj public fountain in 1891, both of these projects preserve the pseudo-Moorish style. Unfortunately, in 1883 he has been diagnosed with “paralytic mental disorder” and died a year later in a lunatic asylum in Graz. Finally, project was completed by Ćiril Iveković.

It was formally opened on 20th April 1896, and handed over to the City Authority. On June 28, 1914, Franz Ferdinand and Sophie visited Vijećnica, during his visit to Sarajevo. It happened right between two attempts on his life, he then said: “Mr. Mayor, I came here on a visit and I am greeted with bombs. It is outrages”. Archduke did not care about warnings that It was not safe, he wanted to visit a wounded adjutant in the hospital by all means. Gavrilo Princip, shot the Archduke and the Duchess Sophia, while they were coming from the Latin Bridge (also known Princip’s bridge). This event, as we all know from history books, started WWI.

In 1949 the building of Vijećnica was handed over to the National Library of Bosnia. The library held 1.5 million volumes and over 155.000 rare books and manuscripts. On 25th August 1992, it was completely destroyed in shelling during the Siege of Sarajevo. The losses were enormous, 700 manuscripts and incunabula and a unique collection of Bosnian serial publications, some from the middle of the 19th century, were all burnt. The witnesses say that citizens where trying to pull out from the flame everything they could and the ashes of the books burnt there were falling on their balconies for two days.

The huge reconstruction started in 1996 it took almost 17 years. It was reopened on May 9th 2014 with the performance of Sarajevo Philharmonic orchestra and nowadays is a heart for cultural life of Sarajevo….

The other hint while you are in Sarajevo, walk the bridges across the river Miljacka, find your favourite, some of them are really remarkable, and some of them have interesting story. I think my favourite are: Šeher -Ćehaja Bridge, Latin Bridge (Princip’s Bridge) and Festina lente bridge right in front of the Academy of Fine arts…. 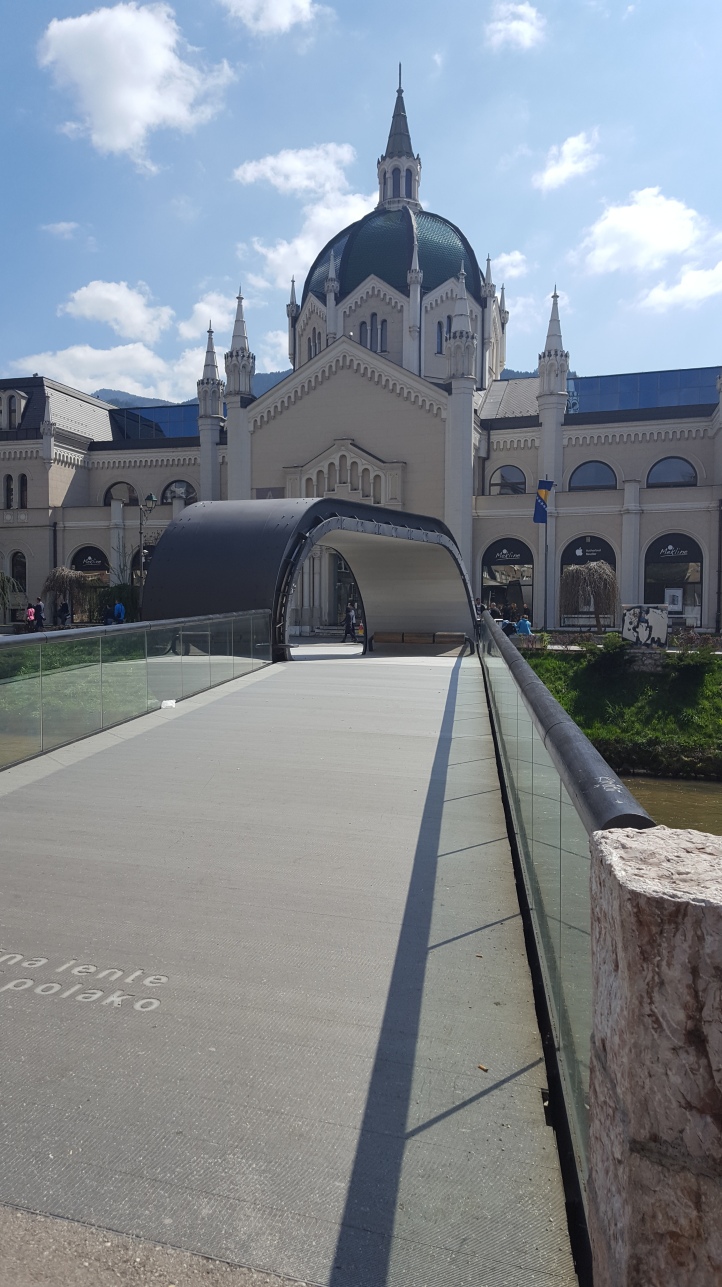 After a great walk, we decided to take a ride to Vrelo Bosne – national park at the source of the river Bosna. It is a favourite place of Sarajevo’s residents and the tourists especially in hot summer days; here the temperature will be lower up to even 10 degrees, due to the pleasant shadow of mount Igman. This place would be your quiet escape from the busy life in the city. All tensions and stress will fade away after one glance at all that calming green colour, and after your ear catches a sound of stream of the spring and waterfalls of River Bosna. After a pleasant walk around, you can ride in horse carriage through the main avenue (Velika Aleja) with lovely private villas on both sides. If you find a forgotten apple in your purse you can treat a horse (s) to a nice snack after its hard work. 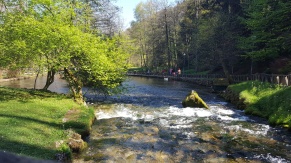 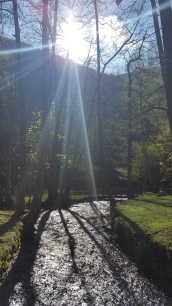 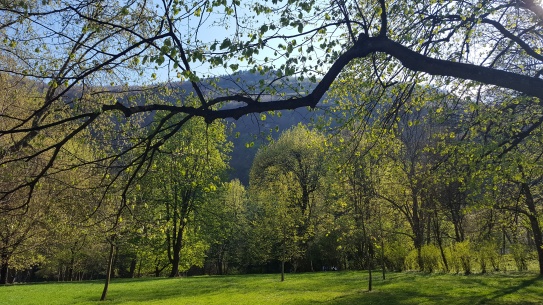 Taxi will cost you approximately 20 KM (1 Euro – 2 KM) one way, and it’s more comfortable to take a taxi then to go with your own car, as finding a parking space would be a huge challenge, especially during weekend. For entering the park, you will have to pay 2 KM, certain groups like children from 7-16, students and older people will have to pay 1 KM, free entry guaranteed for children with disability or those up to 7 years.

Not far from this place you have another historic landmark a Roman Bridge, which was built between 1530 and 1550 from the original Roman stones.

After dusk start falling on the park, but we feltcompletely recharged, we rushed back to the city, to get another foodie experience in a cute little restaurant in Baščaršija with national food “Pod Lipom”.

Bosnian cuisine is one of my favourite, it uses many spices which only enrich the flavour of the ingredients, but meat and fish taste like meat and fish, you do not have to guess what is on your plate. If you are in Sarajevo try Begova Čorba (Bey’s  Stew) – popular Bosnian soup with okra and meat, do not miss sogan-dolma – onions stuffed with minced meat,  Ćufte – meatballs, sarma meat and rice rolled in picked cabbage leaves or raštika -meat and rice rolled in kale leaves or japrak the same but with the grape leaves. I am sure after tasting some of the dishes you will create your top 5 or top 10 😊 quickly. Foodies from all over the world take your chance and enjoy!!!

The centre of Sarajevo is full of little cute restaurants with traditional food and deserts.

After quite busy day, we were looking for some cultural events, for that matter: http://sarajevo.travel/  will help you a lot. It is amazing, but almost every day you can find a few events to choose from: concerts, live bands, performances, exhibitions whatever you like and whenever and wherever you like. We chose the guitar concert by Margarita  Escarpa- Spanish classic guitarist. It was something special listening to a world known musician in a special place in the heart of Sarajevo – Vijećnica. 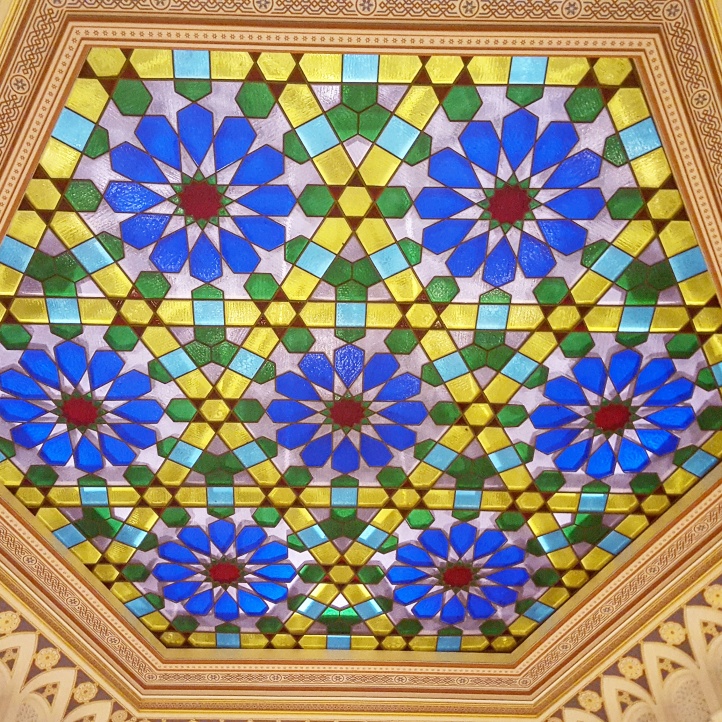 Another story is coming soon. Stay tuned I will tell you about the city of Mostar.